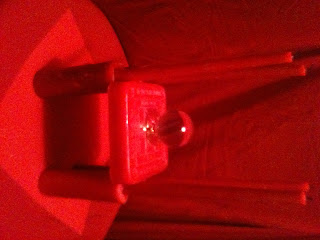 
Awoke and showered with thoughts rather distracting. Ritual attire set....difficult due to worrying about waking up the baby and cats making noise. Began operation with set up being more difficult than usual. I had trouble balancing the Almadel on the candlesticks.  After second round of Invocations there was very vague face shapes. Had the sense that I was pronouncing the Angel's name incorrectly. Distractions of cats running around and meowing outside and baby waking up brought the operation to an early conclusion and no successful contact was apparent. Felt rather discouraged and irritated with myself for lack of focus/concentration.

July Sunday 3, 10, and 17
Missed operation times due to over-sleeping twice and not hearing alarm, and then on vacation. Time away from operations possibly needed.


Last night had difficulty sleeping, was awake for majority of the night, thinking about operation and other arts, mind busy with countless tasks. Arose earlier than alarm, washed face and hands, and went down to room, cautious not to disturb baby. Set up completed just after the hour of the sun began. Stool helped with posture during call, though my focus and concentration were still difficult to bring to bare. Tried with first Angel 'Alphariza' call again but I fear the name is incorrect or dissimilar to original. Did not receive the usual strong signs and feelings of the angel's arrival.
General call to Southern Chora angels were made with slightly better results. Youthful face with long hair slowly appeared after some time but vague and shifty. Periodic 'flashes' from eyes made image dissappear momentarily then resume, image seemed to pulse around inside crystal. After I spoke aloud to the image, It asked what I wanted and I added mastic incense and gave the response for appearance.

The angel affirmed that it would assist to the dictates of my invocation without comment. I forgot to ask its name or if it was the first Angel I intended on calling. I asked about the gold talisman instead and it related that it had not originally been used and that the entire system had seen much variety since the beginning. I asked if the names and letters were proper, and it said the Holy names were, but as before, a variety of names and words of the Alamdel and gold seal had previously been used. (I assume with success). During this exchange, I received images in my mind of someone holding the triangle seal and praying over it before calling the angels and holding it lightly between their fingers, raising it over their head, before placing it on the wax tablet. I'm thinking this was inspired by the angel but I'm not sure. At any rate, it felt like a good method to try out.
It asked if there was anything else I desired and I mentioned I wished to become even more proficient in magick, notably communicating with spiritual beings. The angel responded in the sense that such was not directly in its office and that the ability sat solely with me. "Seek to uplift senses from stubborn concerns to the ascended heavens with frequent prayers which abolish the mind of all baseness."
These words eased my heart and mind a bit and the angel's eyes seemed to look above me momentarily. Images of the angel started to flash and become less distinct again which I took as a sign that it was ready to depart. I issued my thanks and bade it fair well. Before the angel departed a distinct outlined face flashed in the background of the crystal ball, then a 'gold droplet seemed to rise in the air above the tablet and was gone.
I was glad to have received some communication during this operation although still not as spectacular and purifying as  the Eastern operations had been. The images had not been as clear as the others. My feeling is that, despite my successes and progression with this art, I still have some internal working to master to create a clear channel for communication. 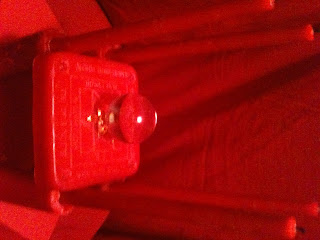 Last Sunday was interesting as I was pretty ill but did the operation anyway. Mind was hazy at best but no distracting thoughts.... Something interesting happened during the opening invocation, I saw tiny 'flames' dance around my crystal ball stand quite distinctly on the altar itself. It caught my attention and came aware that I entirely forgot to place the triangle talisman on the tablet that time. Grabbed it and placed it back on.

Conjured 2nd southern angel, better feeling and response but I had trouble focusing on the conversation due to sinuses going haywire. Face was youthful with intense stare.
Communication consisted of my attachments, professional attitude and standing, what I could do to better fulfill my aspirations I had written in the conjuration, and ridding myself of useless preoccupations. This time I 'heard' less and was filled more with spontaneous emotional/analytical adjustments in responses to my questions. Sorta odd.
I get the sense that spiritual communication of this sort cannot happen as easily if the being is outside a circle.