I honor deeply, all those who have gone before me.
To all, who's lives have helped shape my own, to those who continue their care and support beyond the veil. I extend deepest gratitude.
For each life which is sorely missed, and for those who seek life renewed, yet linger in shadowed past.
To my family and dear friends who have rejoined with the source and to those who have formed bonds beyond heart and body, I thank you all...
There is no fear in the familiar, no worry in the inevitable, and forever gratitude in their enduring support. In this, beyond the curtain of woven senses, are those who were never in body but forever active in soul and this season's honor is also belonging to each of them who continue to help me through my own journey. 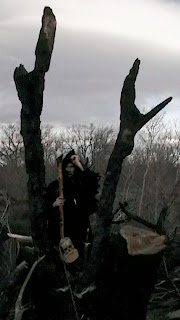 Halloween was always a big deal growing up. In my California home town, the entire neighborhood put on an almost theme park type display with make shift rides and attractions. People acted out Halloween type scenarios: posing as perfectly still statues, rising out of mist filled coffins, and running around on all fours like a werewolf. A couple houses would have multitudes of those professionally carved pumpkins which resembled faces and scenes that seemed impossible to carve out of a gourd. The experience every year was always so amazing and lots of fun for people of all ages. It was a truly a magic filled, fun evening, with everyone involved. I don’t recall a single house not participating in the event. Hundreds of kids raced up and down the streets in well made costumes and parents joined in. I recall my friends and I having two candy filled pillow cases each after the night was through. My family loved the holidays and my dad especially loved it, decorating, carving pumpkins, and sharing a Halloween story wrote called “The Incredible Pumpkin Man”. The story had been written for a local newspaper and later it was made into a short film. The holidays were always something to look forward to in my house growing up. Traditions my parents did a fabulous job passing on.
As I grew older I still loved the holidays but became interested on their origins that most westerners take for granted. Due to my Irish and Scottish heritage I became quite interested in the Celtic customs and holidays. Years later, I co founded a Druidic Grove where the feish were celebrated and Halloween/Samhain took on a whole new, and exciting meaning for me. The holiday now took on a more respectable representation with appreciation for those who have passed on and an appreciation for the dark and the unknown. 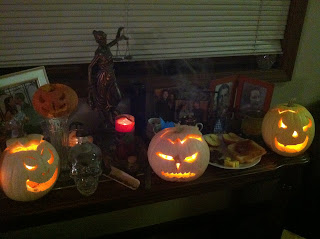 When I was fifteen, I decided to go on a Wild Hunt, which is a term stemming from a piece of Germanic instead of Celtic lore, but one I found irresistible nonetheless. The procedure for the said rite involved a thrilling reconstruction from an author whose notoriety was more than questionable. It basically involves setting out on Halloween night on the hours “Darkest before dawn” (3am- right before sunrise) and pitting your wits against the unknown in a wilderness area over many square miles.
The book containing the ritual in question is highly falsified in its claims and representation of Celtic culture and magic, but one which I found early value in and which led me to further pursuits of traditional magic. Needless to say the experience was rather hair rising and one of the most challenging I ever put myself through.
Later Samhain events consisted more venturing past the veil to reconnect with people and places long since removed from my day to day awareness…while still indoors. The holiday represented an appropriate time to allow the essence of people and events I loved to return from the closed parts of myself which kept painful losses stored away.  It also opened up large avenues for experiencince and learning, utilizing trance and hypnosis techniques I’d grown efficient in. It’s been years since I’ve gone out alone in the wilderness during Samhain to pit my will against my fears and the unknown, but I still remember the feelings perfectly. 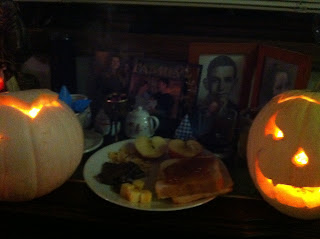 This year, I utilized my time to set out a plate of prepared food and treats, and keep the candles and lamps burning through the night. I give spoken thanks to what I have sensed as assisting interlude from relatives and friends who have passed on. Though I no longer celebrate the Celtic pagan holidays in groups like I use to, I take with me the important aspects which have moved near to my heart.

Life and color withdraw, descending in a beautiful kaleidoscope of form, in cycle. Led perfectly by the design of creation, each image is expressed in momentary brilliance. As if told by a visual fable, each color paints a tapestry of life lived on purpose. A cooling breeze scatters a crescendo of leaves, leaving us with memories recalled through sights, sounds, scents, and feelings. An eventual return to stillness, the leaves come to gentle rest, a promise of altered renewal. We must make room and remember what led the new, and who leads the way for our arrival. Many do not wonder beyond safe trappings of perceived existence without variance. Through stirrings in our hearts of life’s inevitability, we fear the one given certainty of nature’s design. Perhaps dread stems from the wells of unrealized dreams, or our foolish grasping after the shifting sands of time. Memories haunt when we linger in them …too long, dulling the gifts of the present.
They are cherished within our memories, but do not exist there. You will not find them in photos whose still features hold no current place or being. Nothing is gone but often beyond our sight. That which we do not know is that which each of us realizes beyond sheltering creeds or faith.

The bare, still, branches hide the slumbering buds of new life. We fear not, for it has been seen. So it is with that which is not seen. Give a moment of present to those of our past, look fondly on them beyond what you can see, and speak as if time has no baring.