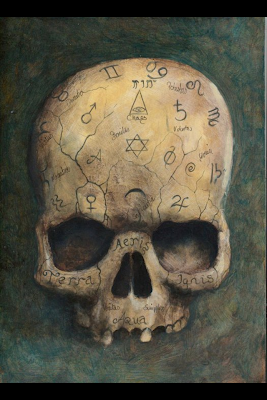 One of these days I'd love to tackle an experiment for housing a spirit in a skull.

I've read in a few sources of where this particular 'item' was used by magicians ranging from the early renascence to the ancient middle east. How many classical images of wizards or alchemist have you seen that contain at least one human skull on a table or tucked on some dusty bookcase somewhere?  Ever wonder as to the nature and use such things were put to?

Though undoubtedly originating from multiple cultures in various parts of early history, my particular interest stems from Old Hebrew magic. From what I've researched, there have been over two thousand 'skulls' found with Ancient Hebrew or Aramaic scrawled with various enchantments.

The concept of the human skull spirit is what is alluded to as an ‘Oboth’ (“The ones who return”) or ‘Yiddeonim’ ( "The knowing ones”) in ancient Jewish culture. Basically, its referring to a familiar spirit who works for the magician/necromancer, accomplishing a variety of tasks.

Later, you find these as inscribed ceramic or iron pots where the familiar spirits were tended and consorted for a number of reasons. 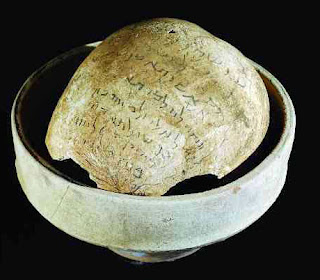 In the original Hebrew verses, it is this oboth or yiddeonim which is ( most likely) referred to when King Saul contacts the ‘woman of Endor’ (Leviticus 20:27 9) A couple of modern magical books go into detail behind ‘spirit pots’. Aaron Leitch, RO, and Jake Stratton-Kent have written about this subject a few times in great detail.

In the ‘Dresden Files’ novels, Harry has a skull named ‘Bob’ that is basically a magical encyclopedia and storehouse of occult knowledge. This idea further sparked my interest in being able to create a real version of this familiar spirit. "Bob" helps Harry solve a plethora of occult mysteries and riddles with his vast occult knowledge that makes up the entire purpose of the spirit.


Basically, the skull is a spirit in a spirit pot which is thus used as an oracle or astral information source. This practice has many common threads through ATRs and older necromantic methods. The dilemma will be: 'Do I house a 'ghost' of a human who I work with and teach to accomplish such things, or find a spirit being which was never physical to begin with? Which is more appropriate to this type of spirit pot? Hmmm

Some of my original research and consideration for this operation came from ‘Communing with Spirits: The Magical Practice of Necromancy by Martin Coleman. I really love this book for the practices and ideas it has set up for working with spirits who were human.

The ritual and procedure to create a veritable oboth or yiddeonim ( the one I have in mind )would take quite a bit of time and resource, not to mention finding a suitable skull. On it, I would inscribe the most potent binding litany of what sort of spirit would be housed in the skull along with appropriated sigils and symbols.

I figured a ‘fetch’ or spiritual informant resource would be most handy: A spirit who could retrieve other spirits to communicate with me or garner information that was obtainable in the spirit world. There are quite a few possibilities with this one.

There is a fantastic specimen and article on such a skull in a few web sites I found.

Look at the one here for the full article on the Skull with magic inscription:
http://www.redicecreations.com/article.php?id=5950

In the website article above, a collector named Shlomo Moussaieff “acquired two earthenware bowls, the open ends of which were adjoined to form a kind of case—inside the case was an ancient human skull. A magic incantation, written in Aramaic, was inscribed on the skull.”
I guess there are more than than two thousand magic incantation bowls that have survived from third–seventh-century C.E. It says, “Jewish communities in Babylonia.a The incantation bowls were made at the same time and in the very communities that produced the most intricate, complex and revered accomplishment of rabbinic Judaism, the Babylonian Talmud.”

The article goes on to state: “Although some have deemed the incantation literature to be inconsistent with the spirit of the Talmud, recent research has shown it to be, rather, complementary and representative of aspects of life reflected within the Talmud.1” Quite fascinating indeed!

"The fact remains that belief in demons was widespread at this time among Jews as well as other peoples. Incantation bowls are known not only from Jewish communities but from other communities as well. The Jewish versions are written in what is commonly known as Jewish Aramaic."

The researchers deemed the "bowls and inscribed skulls were typically used to, “To combat demons—who cause medical problems as well as other mishaps and ills—people invoked numerous magic rites and formulae. The magic rites could also serve as a love charm. Your desired one would surely fall in love with you if the proper incantation was invoked. The reverse was also true. To bring disaster on your personal enemy, you would invoke a curse text. These often-strange and mystifying incantations were usually inscribed in cramped writing in a spiral on the interior of the bowls. Not all magic incantation texts were written on bowls. Sometimes they were written on parchment, tin, lead, copper, silver and even gold. Occasionally we find one on even more exotic materials such as eggs. Now from the Moussaieff collection comes one written on a skull.”

“BY MEANS OF A SKULL.” It is difficult to write on the idiosyncratic surface of a skull; reading a skull inscription can be equally difficult. Like the inscriptions on incantation bowls, the skull text is surrounded by a squiggly line. Although the inscription on the Moussaieff skull is very hard to decipher, one thing is clear: It contains names of people for whom the incantation was made. One of the names, Shilta, is derived from an Aramaic word meaning “after-birth.” The skull itself was probably that of a woman. The exact manner in which this skull was used, however, remains a mystery. A contemporaneous source, the Babylonian Talmud, Tractate Sanhedrin 65b, offers a possible clue: “There are two kinds of necromancy: the one where the dead is raised by naming him, the other where he is invoked by means of a skull.”
These are the main sources for my interest and curiosity. Of course WHO KNOWS when I’ll have time to tackle this project..I need to finish with the ones I’m doing now first……my wife says so lol!
Rare Magic Inscription on Human Skull
www.redicecreations.com
Red Ice Creations - Explore - Observe - Be Here (K)Now

There's no cut and dry directions for creating  the 'Spirit in the skull' but alas (poor Yorik!..I think that's what I'll name the spirit) I'll find a way!