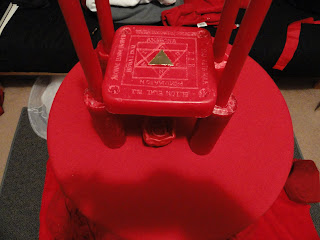 I do not keep my blog updated as much as I ...could, I suppose. I keep in contact with other magicians over Facebook on a more regular basis, but for those who are interested in my magical workings, there are four major workings in undertaking which do not count daily and weekly practices.
These four are:
1. Tradtional, grimoric, Goetic evocation to 'physical manifestation'/apperence.
2. Weekley (Sunday) Almadel evocations.
3. Trithemius Angelic planatery evocations.
4.  Elemental evocations
There is some info I may be posting which will be back dated as I have been writing and adding to it as I've been practicing.
This posting however is about the red Summer Almadel. I completed the Spring Air/White operation and performed an operation almost every Sunday of the season. I attempted and succeeded to contact all five of the Angels which are listed in The Lemegeton. The experiences were by far some of the most amazing I've experienced pursuing OSM, or traditional grimoric magicke ( spelling Goetia) by the book. So I've decided to continue in this work and intend to create and work with all four of the Almadel tablets and cross quarter angels of the elements/seasons. I've learned so much working with this system and believe that contact with these angels are imperative before attempting to successfully conjure and control the demons of the Goetia. 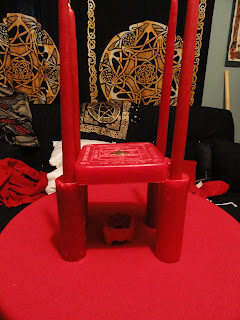 The Lemegeton seems to be set up for success when working it 'back to front', and may have actually been written that way originally. If originally from a Jewish tradition it would have been written thus.


Although not described in the text itself, I believe each Almadel was intended to be inscribed with the triangle and inner words 'pointing' toward the names (and thus the proper direction/Chora/altitude) which the Almadel is designed. I designed the Eastern Almadel this way and received the before results so I'm taking this as a sign I'm on the right track. Also, I have followed the two Hebrew versions of the Almadel and corresponding names rather than the pictured one.

Making the Southern Almadel was not quite as difficult or time consuming as the first (Eastern) one . I learned a lot after making the first one. It still took me from the hour of the sun (5:33 AM) till about 11:00 am though which was long enough. The process is tedious, time consuming, and potentially very messy with difficult clean up. 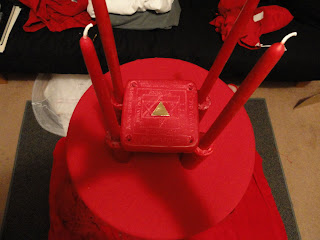 I woke at 5:00 AM, washed, said part of the Solomonic bathing ritual, and went down to the magical room to retrieve everything I use to make the wax and clay items. Before the allotted time, I knelt in front of my altar with all the items , prayed over them and sprinkled everything with holy water.
This coming Sunday will be my first in contacting these particular angels. I actually received advise from the Eastern angels on what to ask for and how to speak with them which was surprising.

I have the other previous accounts recorded but I have not posted any them yet. I debate the idea with how much (magickal) information to share on an online blog. Regardless,I hope you've enjoyed the photos of my work. All the best in the Great work!